Getting Ahead graduate cooks up business on her path to stability 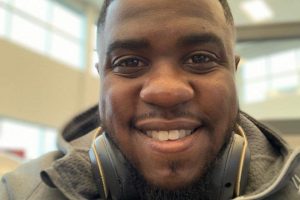 We’re so excited to introduce you to our new Operations Director, Nelson Hardin!

To say Nelson has a passion for helping people is an understatement. In high school, he helped run a food pantry in the D.C.-area feeding the homeless every afternoon after he got out of school. (WOW!)

He also worked with his parents to manage a nearby thrift store and eventually started a women’s shelter with that same organization.

He’s attended the U.S. Coast Guard Academy and worked with teens in the Boys & Girls Club.

When he was in high school he stole from his parents and as a punishment they made him volunteer at a food pantry near their home. When he started to meet and interact with the homeless people that organization was feeding he began to see the stigma that often surrounds poverty.

“It made me realize that people aren’t treated as people whenever it comes to interactions like this,” he said. “It comes from a place of pity or a place where I want to feel better about myself, ‘so let me help you.’ Instead of ‘these are people in need and I want to help them.’”

It was shocking to see some parents of students that went to his school coming to get food for their families.

“Seeing how we were all going to the ‘rich’ school but seeing we all had different stories, different backgrounds. It kind of warmed me to the idea of getting more involved.”

So … what’s it been like to work at Common Heart so far?

“My heart is in it. I love the people, I love the mission,” Nelson said. “I’ve known very early on that it’s been my calling to help people.”