Getting Ahead & Staying There

Give More Than Thanks

Getting Ahead & Staying There 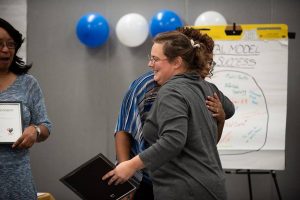 This article appears in the digital magazine “Thanks & Giving” presented by the Carolina Weekly Newspaper Group in honor of GivingTuesday on Dec. 1. See page 12. Thanks & Giving Magazine 2020 by Charlotte Media Group – issuu #CMGGivingTuesday Our Economic Empowerment programs were given a big boost as we get our East Union Empowerment Center open in Marshville thanks to a generous $10,000 grant from our friends at Tyson. We’re so very thankful for partnerships like these to help create a community where all can thrive!

Common Heart is an Indian Trail-based nonprofit founded in 2006 that focuses on food pantries, economic empowerment and literacy.

Under the economic empowerment umbrella sits the Getting Ahead program — an 18-session focus group in which participants learn and develop skills needed to rise out of both generational and situational poverty. Learning takes place through discussions and shared investigations without one person being a teacher.

Two of Common Heart’s Getting Ahead graduates were willing to share their stories in the hopes of inspiring both the participants who come after them, and the donors who helped make their success possible. Here are their stories of ambition and diligence.

Sometimes when it rains, it pours. Such was the case for Sarah Kimbrough, a former paramedic and mother of four with big dreams who just couldn’t catch a break.

Last year, Sarah was hot-wiring her car on and off each time she needed to travel. The cupboards in her home always seemed to be running low and the bills were piling up.

Sarah left her job as a paramedic because of the crazy hours, dangerous scenarios and low pay. Her husband was working, but she couldn’t find any jobs that would still allow her to care for their children — three of whom have special needs.

Then the pipes burst in the trailer they were renting and they moved in with Sarah’s mom.

The Monroe native was utilizing Common Heart’s food pantry when she learned about the Getting Ahead program. At first, she admitted she only signed up for the incentives — gift cards, free weekly dinners and free childcare.

“They really try to remove all the barriers that normal people in poverty face,” Sarah said. “They take care of everything.”

But this focus group quickly became much more to Sarah and her family as they started their journey out of poverty. She said the classes reignited her ambition and helped her figure out how to get around obstacles.

The biggest takeaway was the importance of having a network of resources, she said.

“They were able to hold my hand and push me along,” Sarah said. “We had a lot of conversations of how to jump over the hurdles and get past the poverty.”

More than a year later and Sarah has a reliable vehicle and a part-time, in-home nursing job that works with her schedule to care for the children, thanks to networking and resource sharing from Getting Ahead. She wants to go to nursing school and said Common Heart is currently helping her find scholarships.

Sarah’s experience with Common Heart not only helped her family, but encouraged her to help others in similar situations. After graduating from Getting Ahead, Sarah served as a co-facilitator for the most recent focus group and has since completed training to facilitate the next group on her own.

“I felt like I could help teach it and not be so judgmental,” Sarah said. “I thought I could bring that unique perspective like, ‘I did it and when I started Getting Ahead a year and half ago, I was right where you are.’”

She’s also a key member of the committee working to host the first official R Rules session — a similar program for teens. She said she wants to help youth in generational poverty break out of the cycle by exploring their own potential and implement plans to achieve their dreams.

Sarah wants to be an inspiration, and hopes her own children look at her as an example of diligence.

When Sandy Reid and her family moved to Monroe two years ago, they had dreams of eventually living in the city of Charlotte. They thought they had a solid plan — live temporarily in a hotel while searching for an affordable home for their three children — but it proved to be more difficult than they ever imagined.

Before they knew it, three weeks in the hotel turned into three months and they were blowing through their savings just trying to stay afloat. Sandy said they struggled to find resources to improve their situation and they were running out of time.

“I was at a serious low place,” Sandy said. “We had to jump over a lot of hurdles. It wasn’t easy. I learned a lot during that time.”

Everything changed once Sandy’s church introduced her to Common Heart. She said the nonprofit gave her resources and helped her family move into an affordable home.

“Finding an organization that truly cared and truly took the time to listen and never treated me as a number…that was huge,” Sandy said.

Sandy also started participating in Common Heart’s Getting Ahead program. She said the classes reminded her of her strengths, showed her where she could grow and changed her mindset from a “right here right now thinking to a goal-focused thinking.” Her husband was so inspired by her progress that he enrolled, too.

After graduation, Sandy was hired as Common Heart’s assistant pantry manager and later promoted to economic empowerment manager, meaning she’s now in charge of the program she once participated in.

She coordinates classes, facilitates discussions and also helped create a new course called Staying Ahead — a follow-up for Getting Ahead grads — that focuses on financial literacy, negotiation skills and escaping relational drama.

Getting Ahead was the jumpstart Sandy needed to overcome the barriers preventing her from following her passion. She has since earned a degree in creative writing and literature from Antioch University and published a book, “Conversations with my Daughter About Racism,” that’s available on Amazon. She eventually wants to host workshops on the topics of racism and social injustice.

“Common Heart has given me the space to really be who I am and connect to the community and that’s big for me,” Sandy said. “They definitely opened the door and really ignited the fire that was in me before that had kind of dwindled.”

Visit www.commonheart.org/donate to give to Common Heart and help make more stories like these possible.