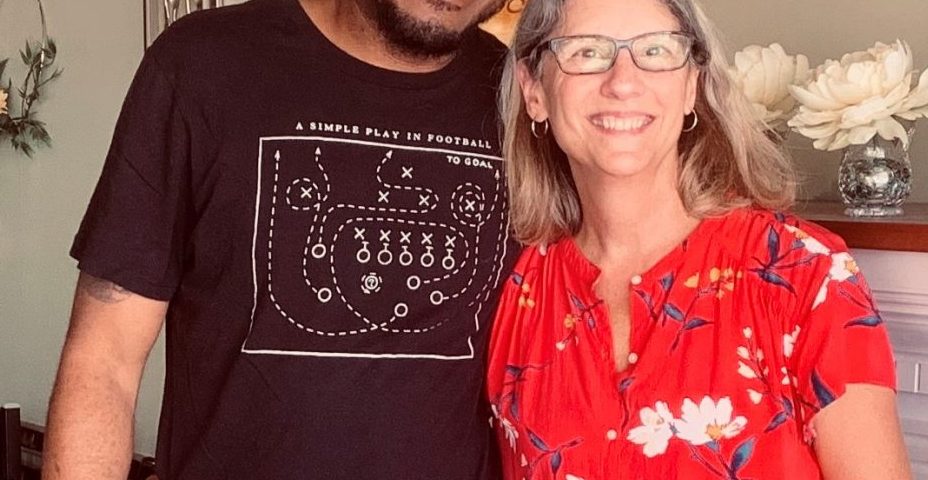 Dion Rymer didn’t know how his family — both locally and those still in the British Virgin Islands — would react when they found out he enrolled in Common Heart’s adult literacy program to improve his reading and writing skills. He describes their reactions in two words: Very proud.

The 38-year-old Indian Trail resident moved with his wife and 16-year-old daughter to Indian Trail almost 2 years ago after hurricanes devastated his native islands. He was working full-time to support his family, but still had a dream: going to college to prepare for a career in information technology.

A quick online search led him to a new free program that he hoped could help: Common Heart Literacy Volunteers. Dion was the first student to sign up. Now, almost a year later, he’s completed the program and is enrolled at Central Piedmont Community College where he’s excited to take the first steps toward the career he wants.

“During these extraordinary times, the Dollar General Literacy Foundation remains steadfast in its commitment to support communities’ literacy and educational advancements through funds that will impact thousands of students across the country,” said Todd Vasos, Dollar General’s CEO and Dollar General Literacy Foundation board member. “We are proud to support the meaningful and impactful work that each of today’s recipients conduct and support their ongoing efforts to help individuals improve their lives through literacy and education.”

Dion’s success story is a true highlight for the Literacy Volunteers program which allowed Dion to set — and then achieve — reachable goals.

Of course, he had plenty of help. It wasn’t until Dion first met with his volunteer tutor, Karen Leadermen, that they realized they lived in the same Indian Trail neighborhood and even used the same gym! That made for easy trips to tutoring sessions, sometimes even meeting in the neighborhood clubhouse. The two have become “good friends,” Dion said. Karen calls it a “magical match.”

Karen’s first task, she said, was to get Dion to see that he could learn and learn well.
“In my approach, it was really important for me to take into consideration his age, his family status, his diversity that he comes to the table with and his goals as an individual,” Karen said. “Dion came with some insecurities about where he wanted to be as an adult male to represent himself, his extended family and the way he communicated. Some of the process was helping him develop some assertiveness and the ability to explain his needs and desires. He really did not have a cognitive understanding of his skills. I would tell him ‘Dion, you’re blowing me away,’ and he would not believe me.”

There was always homework, but Dion didn’t mind. He amazed himself with how quickly his skills improved. His island accent sometimes caused a misinterpretation of a word and misspellings, but that was something the duo worked through as well. They ended each session reviewing what they had accomplished that day.

Karen’s encouragement was key to completing the program, Dion said, and he’s glad to have found a friend to help navigate his first college experience.

“When I have Karen there, I think I’ll make it through,” he said. “She just always has the right words to say to keep me going.”

Dion has some encouraging words for other Union County adults who want to improve their English reading and writing skills.